We are really excited about this road trip we are planning.
In the past we have used weekends for road trips which are nice but...well...you have return pretty soon.

Now we are going to be able to do more than we have ever done before.
Once we used a holiday that was in the middle of the week. It was a thursday if I remember correctly. We went all the way there ....took most of the night....sheesh we had to drive through Pusan....to get to Ulsan. It was alot of fun....but we had to work on friday. So we left wednesday night arrived thursday early in the morning (3am-4am) then we had to return to get ready for
work the next day! 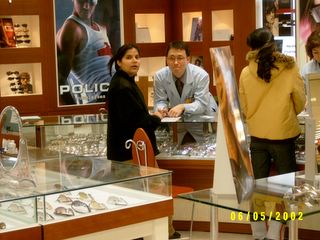 Ok this is a random pic from last year. I just had to include Yogita...she was getting glasses. This is in E-mart which is sort of like wal-mart back home. 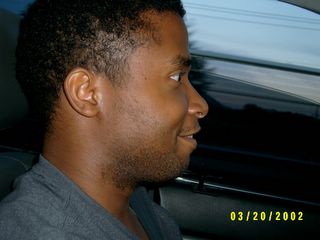 I kept making this expression whenever she looked at me. So um Mike...I will be high on green tea caffeine and I will be bright eyed and bushy tailed.....if you can imagine that! 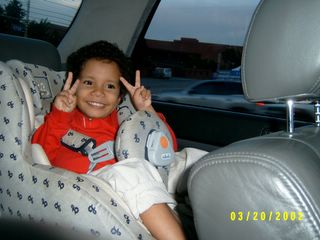 George loves this pose...very Korean...actually He looks like Yogita especially when she was a baby! He loves that car seat..when he sees me taking it out of the trunk...he knows we are going for a long haul! (Of course he sleeps through 90% of the trip....heh..not that I mind much.....LOL) 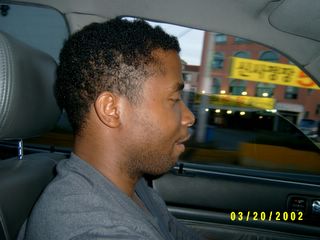 Um...ok I was dozing off, and Yogita took a picture, and cracked a joke. Well it sure woke me up! Just look below... 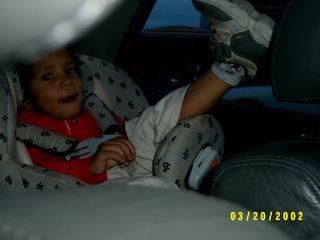 Yeah George knows how to chill too! Actually Yogita is photographing everything...she is the camera person too. 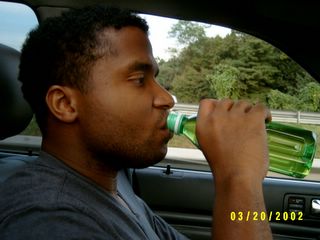 Ugh sent this to the wrong blog but it is ok. ...Now to repeat myself...this is my favorite drug in Korea...green tea.

More on our road trip plans.

Basically during this season or I should say during the lunar new year all roads are packed!
I think that is worse on the highways, as the exit ramps act as a bottleneck to traffic. So we will use the country roads and we plan to travel very late at night. Hopefully to escape the congestion.

Also the side roads have alot more to see as you drive through small towns, and small cities.
We will stop when we are tired or bored of driving and need to stretch our legs.

We have never really driven along the east coast, we hear it is quite nice. Also Yogita watches the food channel (korean), and she and I hear about different Korean dishes in other areas of Korea. It builds a longing for us to go there and try it out. We get itchy feet if we do not travel in more than 3-4 monthes.

So when we where in Alaska it was very hard on us. We did not have a car, we did want to fly out of Alaska, but around the time we wanted to fly, we decided to come back to South Korea.

Now we have been here for over a year, and I must tell you...it has very good for us. Korea is like a second home for us. Life here is very simple. Life here can be quite predictable seeing as Koreans are very homogenous in genes, and nature. For example if I ask my students : "What will you do during the Lunar new year". The response is almost always the same, but I must admit it is quite refreshing when I hear some unique response to such a seasonal question.

We love it hear because well...we tend to be more spontaneous. We act on impulse in certain situations, it really makes life here more exciting. Going to Seoul visiting the friends there, going fishing, taking a ferry to on of the many Islands that dot the coast. AHHHH what a feeling..it is such a small country but it has soo much substance, so much to see and do (ok ok many people feel that places look same...and well they do but we tend to notice the little things).

Ok that is all for now I and Yogita are going for Kam-ja-tang tonight with some students of mine (well one is a former student....Patrick!!!)

Count down to our road trip!

I think I meantioned before that we would be going on a road trip.
We plan to head east, to the coast, then drive south. I am not sure which city along the east coast we will drive to, but we would like head more north.

We will likely go to Pusan on our way south then head back to Gunsan.

The trick we will use country roads..thats right...no highways for us!

It will likely take a longer time. However I plan to stop over and rest at some small town.

During the Lunar new year (when we would be taking this trip) traffic jams will cause crazy delays.

Ok I will post more details later...I can even provide a picture of the traffic jams of Korea's last thanksgiving day (thanks to Yogita!!).

It has been too long.

Ok let me start off by saying...shame on me. I should have been posting more regularly on both of our blogs.

Omorro I have to talk to you. I left a message for me on our yahoo messenger and it would be nice to chat with you.

Mike I still have to get back to you about the trip in April. I am glad to hear your doing good.

Ok actually there is a reason why we could not be more regular in posting on this blog.
The weather! (I know it is a lame excuse....but well...maybe you will think it is a good one!)

We have had a really bad spell of snowy weather lately. Snowing almost everyday for 3 weeks running. Now in Korea they lack the snowplows we are used to, and they do not use salt.

In fact many business owners do not even clear the area infront of thier stores. The result? Many fender benders, and people slipping and falling. I saw an older man slip and he nearly hit the back of his head. Yogita saw a man that had slipped bleeding and he was not moving.

I remember back when we were in Seoul there was a snow storm...well..it was only 4-6 inches but the weather remained very cold so the snow did not melt, and it slowed Seoul to a crawl.
Icy side streets meant that many people slipped and fell in the ice. So many people did that they even held a special report on the news about it.

Well the same thing happened here in Gunsan....except it was to the tune of about 3 feet of snow over a period of 3 weeks...actually it might have been more than that but between snowfalls there was melting that took place.

The city just did not plow...or if they did it was hard to tell. In the industrial area (many of our classes are in this area) the main road as well as the side roads where just icy sheets. Driving...was crazy!! I mean it was more like skating than anything else.

Yogita had a minor fender bender herself....but everyone was ok. (note to self: make sure she has her chains on the next time it snows)

ABS saved my behind more than a few times.

Our scedules where very crazy and very busy. Nowadays there has been a lull. I bit of free time.

I keep forgeting to post more pictures....and Mike I have yet to send out those DVD's....

Ugh I have to get on top of things!!

Ok there will be no pictures this post. I promise I will be more regular...and so will Yogita.....sheesh. She is only interested in leveling and reading on her free time.

Anyways after I hit lvl 50 I decided to go to places I have never gone before. Or try and stay for longer periods of time at places wear I would only stay for maybe 20 minutes max, due to heavy use of pots once my mana was depleted through using v-t.

So recently like today Korean time I went up with x100, and yogita. We totally owned those monters. I mean huge groups of lesser dragons, and fire ghost. Basically very painful!

BUT x100's immune saved us in many situations, yogita's handy +9 yumi, and my NB helped out. My spirit which I think is more uber than I am got owned many times.
If only it could heal its self.

Yogita and I forgot to get a screen shot...it was pretty amazing!


The other location I started to hunt in (for extended periods of time) was 27f....all I can say is wow! Irift's just had a hard time taking down my spirt. ]
Of course Rose is an extremely good tank...she took all of the hits. But eventually we had to venz...too many irifts. However at one point we took down 5 irifts!!!! It was awesome!! Rose perhaps you yogita, and I should go up next time. With yogita I am sure we could have taken on more trouble and survived.


Ok I gotta go...tonight will take a break (will watch a movie tonight!)