I know all of you stateside are aware of what is going on in Mumbai. I think it should be noted that had Yogita and I stayed there....we could have been targets! It is so erie to see places where we were with bodies everywhere! Even at this moment there is still fighting going on. I feel that we are very fortunate that we did not stay there. It is one thing to say we have issues. Everyone has problems. It puts things into perspective....those people were innocent. Having a coffee, ....and then...being gunned down in an instant. We were in those areas passing through. Soo scary.

Ok just something I was thinking about. I mean...just take a look at these pictures they are typical busy train stations in Mumbai. 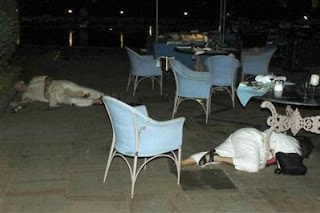 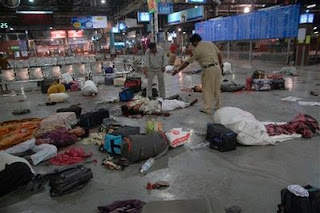 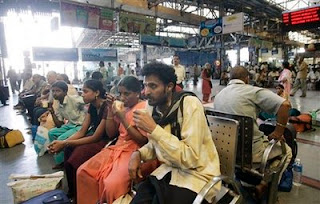 The randomness that is Korea

Wow...this day has been going pretty well so far. I just got back from helping an elderly woman pull her cart up a hill. It was nothing for me, but she thanked me so warmly. I mean...she looked at me...a foreigner, and with out hesitation asked for my help. When I arrived here earlier, I was stopped by a man. He told me I love USA, Canada, India, and named a few other random countries, ending with person. Smiled shook my hand then walked away. This is why I love smaller towns. People are more simple, I am not saying it is all a bag of roses. To think that would be naive. However, as it has been with all of our experiences here...the good FAR out weigh the bad. If I have 1 negative experience...I can count dozens of good experiences to it.

Well...it is Friday which means dinner is on me. It was so nice the why I ordered the food...LOL Yogita...please help me learn how to speak Korean. (actually she already is!).

Well it is nice to be back to driving again. I missed the freedom. I mean to go where ever u want,...well not where ever. Prices in korea have come down in both prices of second hand cars. Also the price of gasoline has dropped from 2000 won a liter to just 1405. And that is not the cheapest station in town. Likely we are in the 1390's now. SO NICE! When I started driving prices were in the 1200 range. If it heads there....we will be taking our 1000 km+ trips again. So we are waiting oil was over priced to begin with anyway.

So that is something I am looking forward to! I will be heading home at 8pm this week. A bit earlier because there is a big test for elementary students. I am happy about this because I have been taking the early morning classes. I could use a little rest.

I drive alot these days...so drops in gasoline are always on my mind. The car we have this time is the Kia Enterprise. It is totally different than the Arcadia. Basically when it was new it was about 50,000 dollars., while the Arcadia was 42,000 dollars. I can see the difference. This car is loaded with so many options that it took yogita and I 3 days to find them all!

Ok i gotta go now, I will post some pictures of the car when we head out for our first road trip.

Jemal
Posted by Jeyo at 4:50 PM No comments:

Almost back on track...

This week is winding down...and I must say it is good to be back on a regular work schedule. Friday is tomorrow and there is that feeling of excitement of what it will bring. This weekend we will be busy chatting, doing some more chores at home. We are looking into getting another car, and we feel we have found what we are looking for.
It is larger than the Arcadia...less about at 175 hp, but it has loads more options. It has many of the same options of the Arcadia (Acura Legend). It has the benifit of being produced in Korea and still being widely used. That means getting spare parts will be easier. This does not mean that our love for the Arcadia has died. It is just not as good a choice for us right now. We are aiming to buy that car perhaps at the end of the next year or a little later.

We also plan to have 2 internet connections to feed our addiction to high speed internet. I love downloading a 2gig file on this crappy work connection....in 1.5hrs!! That means at home I would have gotten it in perhaps 30 minutes or less!
We will have the second system up and ready by next week. We cant wait but we are patient as there are so many other things to set up. Yogita changed her name..something she has wanted to do for a long time. It is Yogita Jemal Hogan. I am very happy, and feel deeply moved that she would change her name like that. I will be doing the same when I remake my passport next year. I mean...why not? She means that much to me, as she has already shown. It might be a bit complicated...but that is ok. So soon I will be Jemal Yogita Hogan. I like it...it has a nice ring, but the meaning to the name is very deep for me. The name Yogita means one with ability. Yogita shows this everyday. She is able to pick up new skills so quickly. Her ability with languages is nothing short of amazing.

Many times I have come home only to be told of a network error, that was troubleshooted by Yogita. She is my genious. In the field service, she is able to use her langauge ability alot. I mean even though the householder might be using Tagalu, or some other language..if Yogita has heard the sounds, nuances of the langauge...her ability kicks in. She is then able to communicate with them. I have seen this happen many times.

In short...she is amazing!!! We both recover very fast after getting sick or injured..but nothing compares to Yogita. I mean..she gave birth...had major surgery and was up and going at 110% after 3 days. That means intense healing for one day, then gradual increases to her energey level over the next 2. Oh and the doctor's would look at the wound....it looked like it had healed 2 weeks ago rather than 2 days. There is a secret to our recurative powers....that is...us! In India I fell very very sick. I was going into shock...it was not going well for me. But while in the hospital, Yogita's prayers to Jehovah, and her love helped me alot. I was up and about after 12 hours. I went from having diarrhea, fever, dehyradation. To about 60% after such a short time. Of course after that I rested ALOT for the next 2 weeks. Basically I was not only of the woods....but just needed my electrolyes to back to normal levels.

Ok...I will have to head to class...I am very thankful to the woman I call my wife. With out her I would be a aircraft carrier with no planes, a car with an empty tank...bascially just a shell of a man. She makes me Jemal Yogita Hogan.

Well we have been back for just under a week, and it feels like we returned home.
We have lots of things today. Buying a car, setting up our Internet connection, the way we want. Basically just getting settled in. I think I have broken a number of personal records this year....

The longest flight....about 16-17hours in the air from Mumbai to New Wark. It was...VERY HARD. It was made easier due to the fact that there were power plugs located just under the seats. I was able to use my Legnote.....it is a HUGE laptop..so I kinda call it a legnote. It was ok..I was able to read comics, and play a pc game that I brought along.

However, I was so tired that I slept for a few hours, and spent the rest watching movies. I don't know about other people but..I LOVE THE FOOD ON AIRPLANES. Well not in India...it was ok. Poor Yogita was having some airsickness so she could not eat on her flight over to Korea. I wish I was sitting next to her on that flight...yummy! Actually the portions seem just about right...so I would not have been able to finish her food anyway. Now I am getting hungry....should stop talking about food.

Well I am in Seochon now...the students here are sweet, and I am getting along very nicely with them.

I often see teachers (usually foreign) have a hard time with elementary aged students. Often times the major issue is the teacher not reaching out to the little people. The teachers often over re-act, shouting...basically loosing control.
This often scares Korean students.

Well it is so nice to first meet a group of students, and see them change right in front of your eyes, in a matter of ten to fifteen minutes. I should note though that I have seen Korean teachers too loose their cool, it is never a pretty site. I think becoming a father has helped me to better understand younger students. Well enough rambling! I named this post "Wow" for a reason. Prior to this post, there was 365 post...a year of postings over a 4 or 5 year period!

I must admit I made some serious mistakes on our blog, and could have damaged relationships within the family. I think all involved know what I am talking about. I mentioned some events that happened in the past, that had no business ending up in a public forum. I sent emails to those parties involved and that should have ended it...it would have remained a private matter that could have been dealt with in a proper way.

So I apologize for publicizing those events. I will be deleting those posts in due time. I hope this small step can help start to heal wounds in those who are not, and were never involved in the original events in the first place.

So once again I am very very sorry. Please forgive me!

P.S Pictures will be coming soon, and even better imbedded videos!!
Posted by Jeyo at 4:52 PM 1 comment: