Here we are again!

it's almost December..... almost the end of this year.....almost time to say goodbye to another year....

Well actually I am updating this post. We are in December now and it looks like it will be a very cold winter.

Plans for the two 3 day weekends? Well I will take the family on a road trip to the southern area of South Korea.
The other 3 day holiday rest at home.

Well it is a Monday and...its not too bad of a day.

Well it we getting closer to the end of year, and wow we have had 3 weeks of gloomy cloudy rainy weather. Of course this is needed as drought like conditions have been causing issues with farmers.

Yogita and I are undecided on what to do this winter. We will not go skiing it is just way to pricey. Resort towns basically make most of their yearly income 3 months out of the year. So you can expect prices to be crazy high. I hate mark ups.

A Russian fighter bomber wws shot down yesterday, or the day before. Then the helicopter that was sent in to rescue the pilot..got shot down as well. All of this with American made weapons in Turkish hands. This odd proxy world war might actually break out into a real shooting war between major powers.

God's day will come. For that will be the ultimate solution for mankind. 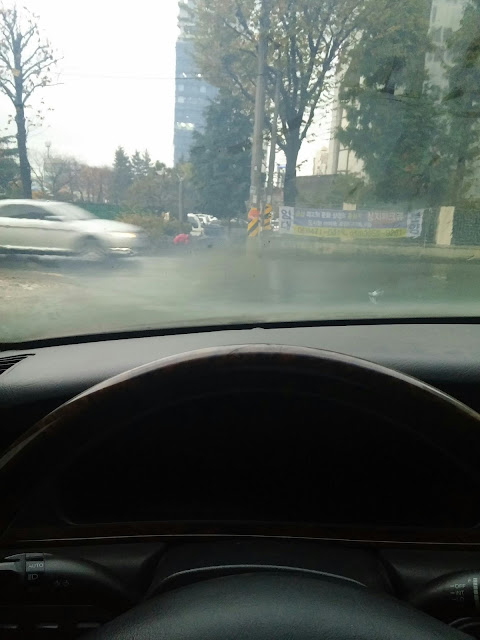 Labels: taken from my car.

We had a nice friday night, well it could have been better except that we ran into a drunk guy, and I had to kind of take care of him. No, not beat him or something stupid like that. I had to make sure he didn't hurt others by distracting him and pretending to understand his gibberish. In the end it worked no one got hurt and he fell asleep outside only to be taken home by the cops.

Then saturday was a pleasure, we watched a new tv mini series (new for us), and played eve, read our books.

It was in the evening that I decided to check my smart phones CNN app. Oh my goodness....Paris was a warzone!!! It made me think how we all think we are save in our respective locations in the world. This should be a wake up call. These people are dangerous! Here in Korea I hope they do not strike here. It would be horrific, I think more would perish. In Korea like when I was in America post 9/11 world events seemed that that "stuff" happening over there. Not so, we are living in a world were we are more connected than ever. Heck some of the terrorist even arrived via the waves of immigrants. They had the audacity to pose as helpless people fleeing dangerous lands. THEY were the danger the wolf in sheeps clothing.

Korea simply isn't ready for such acts. The drunk guy above, if he were in America would have been carted off to jail, and if he was violent with the cops...well we know what would have happened.
In Korea that person is basically taken care of.....taken well care of. Driven home, helped into their house.

Ugh death is an ugly reality in a world where we are mostly desensitized to it. IS shoots down an airplane full of holiday goers, goes on a rampage in paris. On a good note the "voice of IS" was blown to kingdom come. I wonder how he will justify his actions in front of God?

ps. Iraq it seems warned of an impending attack a day before it happened....

Your power supply unit and your desktop computer

Well once again computer woes have struck us. This time I installed a better graphics card in yogitas pc. Well...the next day Wednesday sparks started flying from her tower. I always keep our cases open so that I can see whats what in case.

Well in this case I thought the worse had happened, maybe the graphics card overheated (it was an older card), and it blew up. It can happen. But when I removed the graphics card it was not even very hot. In addition I smelled the card and there was no burnt smell. This is a tell tale sign if hardware burns out, there is a noticeable burned smell. There wasn't in this case. So I had a slim a hope. Perhaps the Power supply unit fried (the graphics card drew more power than the old card), and perhaps the damage was limited to the PSU.

Well just like what happened in India in late 2012 when power surges took out 3 power supply units in the 3 desktops I was running at the time, I got lucky. The cheap psu I bought actually did its job. It limited the damage of the overload to only the PSU. So instead of basically replacing everything motherboard, RAM, cpu, psu, AND the gpu, I only had to replace the PSU. I always keep back up hardware ready, and now Yogita's pc is back up and running.

So the moral of the story? Your PSU is the weakest link in your PC set up. Get a good quality PSU, cause if you are a gamer it will save your wallet some day!

Well October was a wild ride. We went camping we went out with our students. My best friend and his family along with yogi and the boys had some nice times as well.

However it is time to slow down a bit. I want to put more time into setting up our website. In addition I want to host the website from our own server. Basically an old windows xp rig with some extra ram thrown in on our 1gbs internet connection.

In addition I want to focus on freelance editing work. Our paypal account is growing now. So it would be nice to grow that income stream into something that is sustainable. Oh well gotta go!!

Camping in the fall...

Well well well. We did it again. The screen tarp worked very well, and thanks to Gospel (Friend of mine, Gospel is his English nickname), we now have proper knots for the poles.

For the first time since we started camping we sort of fit right in in terms of our set ups. I will post pictures but some are also on facebook.
There is just one issue yogita and I had....electric blankets, or heating mats. They are cheap and sold everywhere...I should have picked up a set. We froze at night!

I was really surprised by how many people went camping nearly 70% of the camping spaces where filled. I hope this trend continues next year. This time we are more than prepared. I hope we can do this with my best friend Sun. He bought a small tent but I think they bought it on impulse as camping in Korea requires quite a bit of equipment.

When we got home on Sunday, we napped, and read our books. It was relaxing. Now this week is the week we finally finish the hogwan website. Time to put the thinking caps on! (it will be a very simple set up, just more informative, and up to date than the current confusing "pretty" website.